Life & Style
Could you wear the same dress every day for a year?
By ANNA SHEPARD
Published: August 17, 2009
When it comes to the question of what to wear in the morning, Sheena Matheiken has it easy. Hanging in her wardrobe is a little black dress designed by her friend, Eliza Starbuck. This she has pledged to wear every day for a year. Don’t worry, she is going to wash it. In fact, she has seven exact copies of the dress that she will alternate — to prevent it falling apart as well as appeasing hygiene-concerned colleagues at the advertising agency in New York where she works. 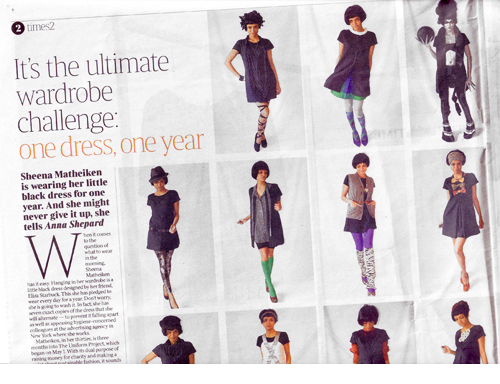 The Uniform Project, which began on May 1. With its dual purpose of raising money for charity and making a point about sustainable fashion, it sounds a touch puritanical, but if you visit her website and blog, you’ll notice a playful tone. Every morning, she jazzes up the dress with unusual accessories — so far there have been mermaid tails, necklaces made from breakfast ingredients, floppy sunhats and Jackie O shades — then she posts a picture of her outfit online and puts one dollar aside. By the end of year, she’ll have enough money to support a child born in an Indian slum through school. “There’s this misguided notion that charity work has to be depressing,” she says. “I want to show that it can be fun and inspiring and make the model of giving back less daunting.”
Matheiken is also making the point that style and sustainability can go together. Given that we spend nearly £40 billion each year on clothing in the UK alone — with 1.5 million tonnes of it ending up in landfill — it’s an important one. By illustrating how creative you can be with one simple dress, Matheiken is standing up to today’s culture of fast fashion. She resists calling herself a green campaigner, but is critical of the modern habit of buying too many clothes and then dumping them a few months down the line. “We should be trying to get a full life cycle out of each item of clothing that we buy,” she says.
Spending a year in one dress is a powerful statement, but what about the sartorial boredom? “If I wasn’t allowed to add accessories, it would be completely different,” she says. “The way I’m doing it, it’s not boring at all. It’s forcing me to be creative, to try out looks that I’d never previously have imagined. There’s not much that I miss from my old wardrobe.”
The clever design of the dress is partly to thank, since it can be worn in lots of different ways. “It’s essentially a short-sleeved black minidress, but it’s also reversible and it has buttons down one side so it can also be worn open as a tunic,” she says. “I asked for deep hidden pockets as I hate carrying my purse.”
Bizarrely, getting up in the morning now takes Matheiken longer than it used to, since she spends roughly half an hour working out the day’s look before photographing herself for the website. “Some days I don’t feel 100 per cent myself, but leaving behind my comfort zone is all part of it. Today, for instance, I’m wearing a frilly shirt over the dress that’s not really me, but people at work have said that they like it.” 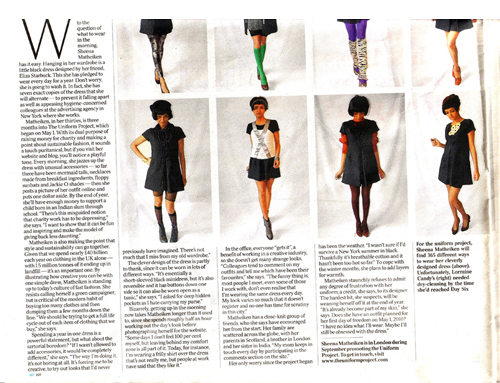 In the office, everyone “gets it”, a benefit of working in a creative industry, so she doesn’t get many strange looks. “Colleagues tend to comment on my outfits and tell me which have been their favourites,” she says. “The funny thing is, most people I meet, even some of those I work with, don’t even realise that I’m wearing the same dress every day. My look varies so much that it doesn’t register and no one has time for scrutiny in this city.”
Matheiken has a close-knit group of friends, who she says have encouraged her from the start. Her family are scattered across the globe, with her parents in Scotland, a brother in London and her sister in India. “My mom keeps in touch every day by participating in the comments section on the site.”
Her only worry since the project began has been the weather. “I wasn’t sure if I’d survive a New York summer in black. Thankfully it’s breathable cotton and it hasn’t been too hot so far.” To cope with the winter months, she plans to add layers for warmth.
Matheiken staunchly refuses to admit any degree of frustration with her uniform; a credit, she says, to its designer. The hardest bit, she suspects, will be weaning herself off it at the end of year. “It’s already become part of my skin,” she says. Does she have an outfit planned for her first day of freedom on May 1, 2010? “I have no idea what I’ll wear. Maybe I’ll still be obsessed with the dress.”
Read original >