Year 2 of U.P featured the ‘Uniform Project Pilots’ – a monthly series of micro-challenges where select women took features 1 Dress for 1 Month for 1 Cause. Each month, a new face in a new black dress took on the 1 dress challenge to fundraise for a cause of their choice. U.P worked with each of the women to create their ideal version of the Little Black Dress. Each Pilot reinvented their LBD for a whole month with preowned, vintage, thrifted or donated accessories. 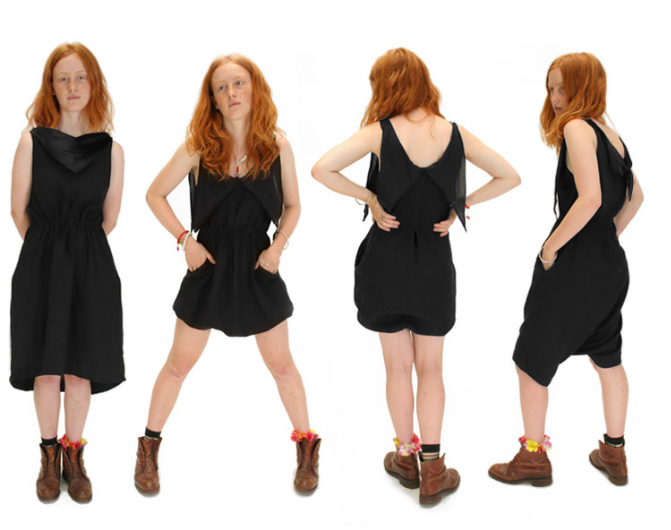 “My style is a cross between whether I want to be fashionable or not.”

Effortless, arty, subversive, and ultra mellow, India Salvor Menuez has an unaffected cool. Half New Yorker, half Icelander, India enjoys oxymorons, dying antique stores, and hot gluing their clothes together. You’d be hard pressed to wear India’s little black dress the same way twice. It is a loose fitting silhouette in 100% organic cotton sateen and gathered at the waist with a hidden drawstring. Like Sheena, deep hidden pockets were a must for India. A row of snaps at the hemline snap the dress into a jumpsuit, that can be scrunched up into a mini romper as well. Being a huge advocate of alternative education, especially for kids who otherwise would not get an education at all, India wore the little black dress for a month to support Our School at Blair Grocery. 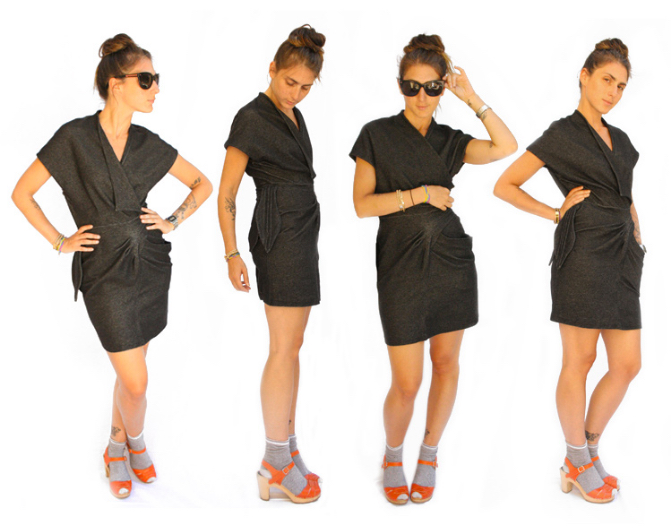 Sums it up pretty well. People read Lesley Arfin because she writes what’s on her brain and has a vault of poppy references stored in it that she spews all over the page on a regular basis. She started at Vice Magazine where she wrote the column “Dear Diary” which was then turned into her first published book. Later, Lesley would go on to become one of the writers of HBO’s hit show GIRLS. Despite the uncountable number of blogs, columns, and words she bangs out daily, Lesley was game to add one more to the roster and take on the Uniform Project. Lesley’s dress was the first denim version of the U.P LBD, designed by NYC designer Judi Rosen.  For the month of September, Lesley raised funds for the Phoenix House to help people overcome drug addiction—a  cause that Lesley holds close to her heart. 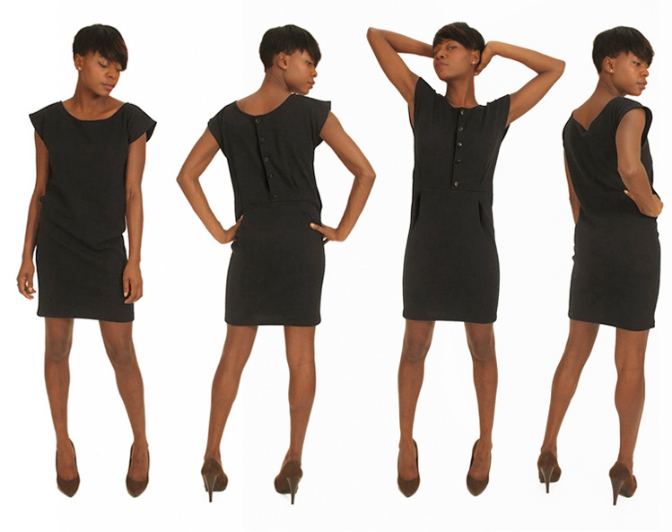 Meet Isis Salam, Nigeria-born, Canada-bred and Berlin-based electro hip-hop singer/emcee/producer and the latest addition to our U.P pilot crew. Steadily taking over the music world, Isis is the complete package with lyrical talent, musical chops, miles of style, and fiery charisma. And did we mention she’s one of the funniest people we know? There were a couple requirements in designing Isis’ dress; it had to have stage presence, be photo op-ready, and have lounge-in-the-studio ability. So, we made her a basic, over-the-head LBD out of a stretchy organic cotton, organic wool and Lycra jersey knit. Isis raised over $2000 for One Laptop Per Child throughout the month of October. She raised enough money to give laptops to a class of 100 kids at the Galadima School in Abuja, Nigeria. When this woman puts her mind to something, you best believe the hype. 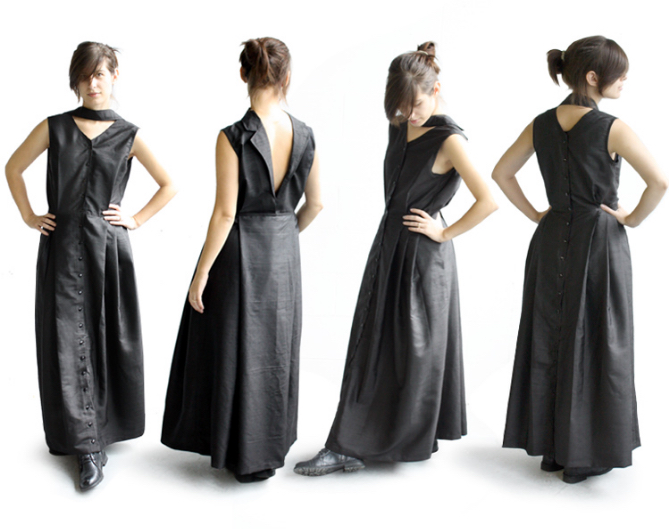 “Too many ideas, too little time.”

Hailing from Montreal, Angie suffers from over-inspiration. She’s been stitching and making stuff since age 5 and as an adult, went on to start her solo label, Norwegian Wood – an appropriate name as she’s part Norwegian, and loves both the Beatles song and the Murakami book of the same name in equal measure. Presenting different limitations than the typically short LBD, Angie’s is the premier “Long Black Dress” at U.P. Angie raised money for Free the Children– the world’s largest network of children helping children through education, who has over one million youth involved in their innovative education and development programs in 45 countries. 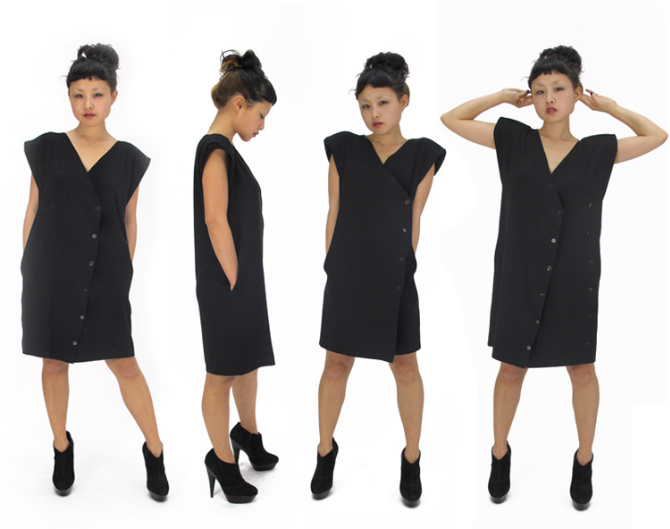 Trained as a painter in Japan, and now making clothes, performing, and playing music in New York, Aki Goto effortlessly embodies the spirit and soul of a multifaceted artist. She designed her own Little Black Dress for the challenge — a rectangular silhouette with an asymmetrical flap that buttons across the front to form a deep v-neck. Through her 30-day pilot, Aki raised money for Songs for Kids, bringing musicians to the cancer center at Egleston Children’s Hospital in Atlanta, Georgia. SfK’s mission is to enrich the lives of children in need through music. For kids suffering from an illness or hardship, music is a powerful tool to inspire, motivate, uplift and heal. 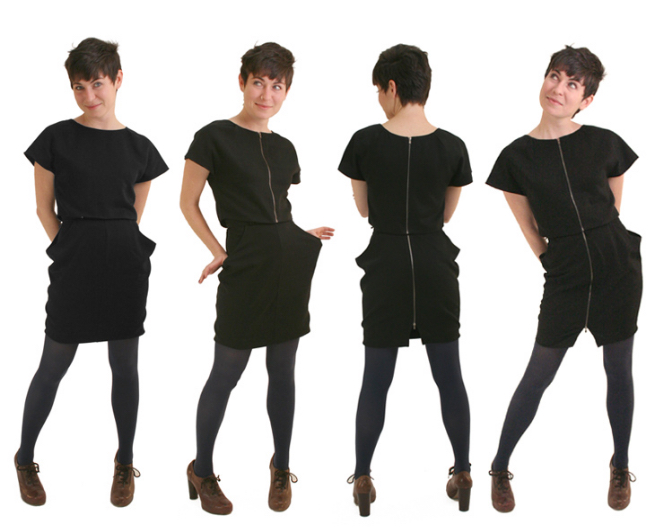 Jess Engle is no stranger to UP. She was toiling away behind the scenes as U.P’s social media manager and blogger before she took on the on-camera challenge. When Jess was 5, she moved to Addis Ababa. Her first exposure to Africa left an indelible mark and a deep love for a culture filled with equal measure beauty and cacophony. So she wore her little black dress for 30 days to build a school in Ethiopia, where she went to school herself.  Jess also found sponsors to match her donations, so every $1 donated became $5, helping her raise over $11k for the non-profit, A Glimmer of Hope. Jessica’s LBD is inspired by one she already has in her closet, designed by one of her closest friends from fashion school, Sarah Brasher. 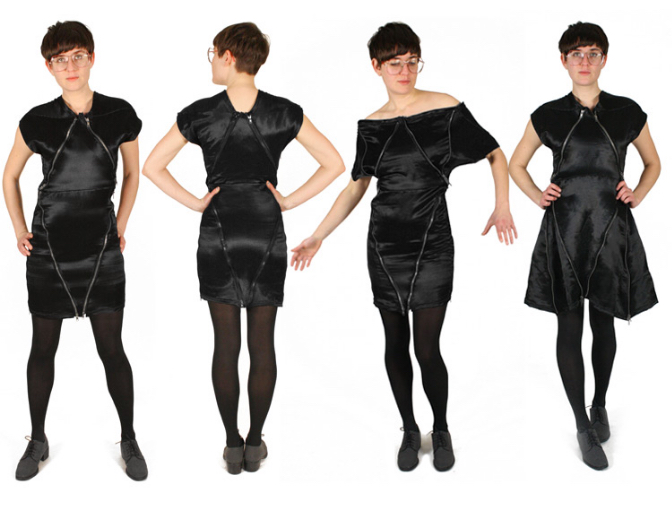 “A drink from a time in the past, called the future”.

The “Lil Snotty” half of the Brooklyn based clothing line Ruffeo Hearts Lil’ Snotty (RHLS), Sarah spends her days designing and sewing clothes. RHLS is very much based around color and shape, so when you take away color, the only thing left is shape. So Sarah tackled this challenge by constructing a dress completely out of triangles. By harnessing the power of two way zippers, Sarah’s dress could expand and contract to drastically shape shift. Sarah raised money for City Harvest, an organization aiming to end hunger throughout New York City. Not only is City Harvest working to feed hungry bellies they are empowering people through outreach and teaching people how to eat healthy on a budget. 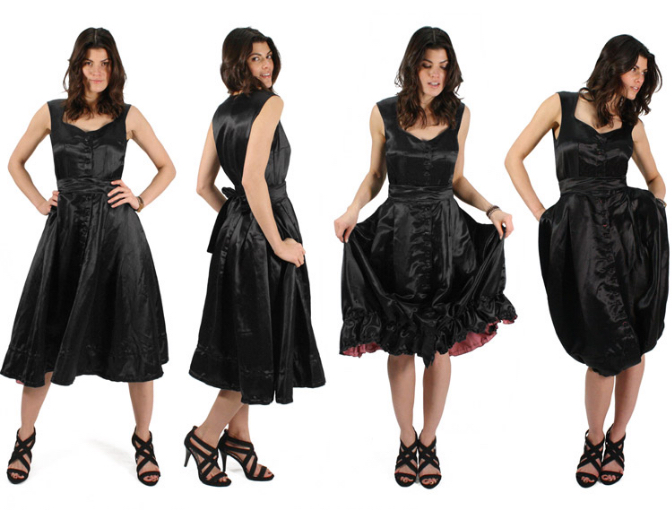 Serial entrepreunuer, sustainability expert, plant lover, entomologist, model, author, speaker and one terrific girl to know. For the month of March 2011, Summer reigned in spring in her LBD designed by Terri and Sandra of Carasan Designs. And she raised funds for charity: water. Adding more excitement to the month was Payless ShoeSource (on behalf of Summer’s environmentally-preferable shoe line zoe&zac) who agreed to match funds dollar-for-dollar up to 10k. The month was a raging success, surpassing Summers goal of 10k by raising a total of $12,519, enough to build two Uniform Project wells in a developing country.