The Uniform Project: one woman, one dress, one year
BY SANJIDA O’CONNEL
guardian.co.uk
Wednesday 24 June 2009
We’re all guilty of buying too many clothes. Now one woman has pledged to wear the same dress for a year – with a different twist every day. Sanjida O’Connell reports.
There’s no such thing as a free frock. The fashion industry produces 3.1m tonnes of CO2 and 70m tonnes of waste water a year, not to mention the amount of herbicides, pesticides and toxic chemicals released into the environment. To dress ethically, we need to buy fewer clothes – even if the ones we do choose are Fairtrade and made from organic cotton. But unfortunately for us, humans are intrinsically hardwired to crave novelty. Who hasn’t got a buzz out of buying a brand new outfit?
I asked Tony Juniper, the ex-director of Friends of the Earth and a Green Party candidate, how he believed we could protect the planet by consuming less when most of us want more. “We need to study psychology and find out more about the brain”, he said. “Deep within us we have an innate desire for comfort, for security and for status. We need to get to grips with this and start crafting alternatives that get the same brain reaction.” Scientists have already found the part of the brain that we use when we want to buy something new (the nucleus accumbens in the cortex; we release the neurotransmitter dopamine, a precursor to adrenalin, when we shop).
So could The Uniform Project be the way round buying less but still stimulating our cortex? New York-based Sheena Matheiken has pledged to wear the same dress every day of the year. It’s actually seven carbon copies of one dress, which she jazzes up with vintage accessories, thrift store finds and eBay purchases. “Think of it as wearing a daily uniform with enough creative license to make it look like I just crawled out of the Marquis de Sade’s boudoir,” she says.
The analogy may make you squirm, but Sheena certainly looks cute. She posts a photo of herself in her dress every day and adds a dollar to the charity she’s raising money for: the Akanksha Foundation, a grassroots movement that is campaigning for more schools for the 7.5m Indian children currently unable to get an education. She hopes we’ll all help out by donating dollars ($360 pays for one child’s education) and accessories too.
Sheena says, “I was raised and schooled in India where uniforms were a mandate. Despite the imposed conformity, kids always found a way to bend the rules and flaunt a little personality. Boys rolled up their sleeves, wore over-sized swatches, and hiked up their pants to show off their high-tops. Girls obsessed over bangles, bindis and bad hairdos.”
To turn to the practicalities, how on earth do you design a dress that can be worn all year round? Sheena’s friend, the designer Eliza Starbuck, copied and modified one of Sheena’s favourite dresses. Sheena says, “The dress is designed so it can be worn both ways, front and back, and also as an open tunic. It’s made from a durable, breathable cotton, good for New York summers and good for layering in cooler seasons.”
I don’t have Sheena’s stamina, her creative chutzpah, nor her wardrobe space for the accessories, but I think this is an admirable way of cutting back on buying while still retaining a delight in dressing and fuelling our need for novelty. Could this be the return of the uniform? Read original > 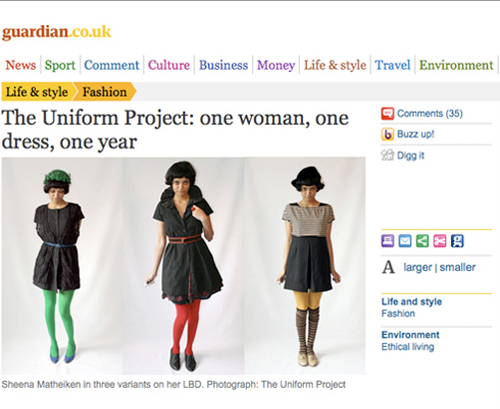