Consumed
This Year’s Model
By ROB WALKER
Published: July 9, 2009
Rules stifle creativity and enforce conformity. Rules can do something else too: inspire creativity that thwarts conformity. Anyone who has observed a pack of kids in school uniforms will note the individualistic tweaks: rolled cuffs here, an accessory there; whatever loopholes in the sartorial rule book can be found are promptly exploited. Sheena Matheiken certainly noticed such things when she was just such a child, attending schools in Kerala, India, where uniforms were the rule. In May, Matheiken, who these days is the creative director for a Web-design company in New York, started the Uniform Project, which involves wearing the same dress every day for a year, and seeing just how aesthetically creative she could be despite that limitation.
Her experiment’s home is theuniformproject.com, where she posts a picture every day of whatever ensemble she has come up with. The exercise was designed to attract online attention, as it is also meant to be a yearlong effort to round up donations for the Akanksha Foundation, a nonprofit that supports education efforts for underprivileged children in India. By late June, about 60 days into the project, she had raised $3,313. And she had certainly attracted online attention, from a variety of enthusiastic fashion bloggers and Web publications and (of course) a pack of Twitter and Facebook supporters. 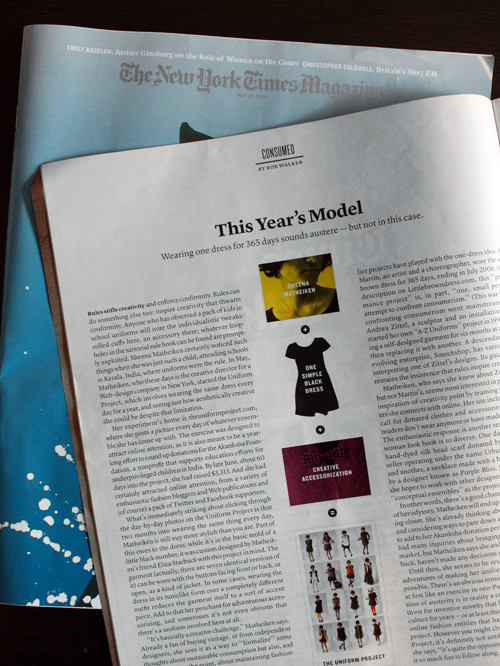 What’s immediately striking about clicking through the day-by-day photos on the Uniform Project is that two months into wearing the same thing every day, Matheiken is still way more stylish than you are. Part of this owes to the dress: while it’s in the basic mold of a little black number, it was custom designed by Matheiken’s friend Eliza Starbuck with this project in mind. The garment (actually, there are seven identical versions of it) can be worn with the buttons facing front or back, or open, as a kind of jacket. In some cases, wearing the dress in its tuniclike form over a completely different outfit reduces the garment itself to a sort of accent piece. Add to that her penchant for adventurous accessorizing, and sometimes it’s not even obvious that there’s a uniform involved here at all.
“It’s basically a creative challenge,” Matheiken says. Already a fan of buying vintage, or from independent designers, she sees it as a way to “formalize” some thoughts about sustainable consumption but also, and maybe more to the point, about maintaining fashionable flair within constraints.
The blognoscenti were quick to note after the Uniform Project site started making the rounds that earlier projects have played with the one-dress idea. Alex Martin, an artist and a choreographer, wore the same brown dress for 365 days, ending in July 2006. In the description on Littlebrowndress.com, this “performance project” is, in part, “one, small personal attempt to confront consumerism.” (This was before confronting consumerism went mainstream.) And Andrea Zittel, a sculptor and an installation artist, started her own “A-Z Uniforms” project in 1991, wearing a self-designed garment for six months at a stretch, then replacing it with another. A descendant of this evolving enterprise, Smockshop, has various artists interpreting one of Zittel’s designs. Its guiding spirit remains the insistence that rules inspire creativity.
Matheiken, who says she knew about Zittel’s work but not Martin’s, seems most interested in pushing that inspiration-of-creativity point by teaming up with others she connects with online. Her site includes an open call for donated clothes and accessories: things her readers don’t wear anymore or have made themselves. The enthusiastic response is another reason her one-woman look book is so diverse. One day she sports a hand-dyed silk head scarf donated by an Etsy.com seller operating under the name UrbanGypsyGoods, and another, a necklace made with a bow tie donated by a designer known as Purple Bliss. Matheiken says she hopes to work with other designers on even more “conceptual ensembles” as the project continues.
In other words, there’s a good chance that by the end of her odyssey, Matheiken will end up with an overflowing closet. She’s already thinking about that, she says, and considering ways to pare down again — an auction to add to her Akanksha donation perhaps. (She has also had many inquiries about bringing the dress itself to market, but Matheiken says she and her designer, Starbuck, haven’t made any decisions yet.)
Until then, she seems to be reveling in the stylistic adventures of making her uniform as un-uniform as possible. There’s an obvious tension here: what sounds at first like an exercise in neo-Puritan making-do in a time of austerity is in reality a celebration of the very thirst for inventive novelty that has defined consumer culture for years — or at least that has defined the many online fashion entities that have glommed onto the project. However you might characterize the Uniform Project, it’s definitely not antifashion. “If anything,” she says, “it’s quite the opposite.” Which is what makes it so much fun to follow along. Read original >