When fashion gets personal, there’s really no stopping it. Raffaele Ascione is the perfect example. His eye-catching designs, seen on Lady Gaga earlier this year, are inspired by memories and emotions. And the outfit he generously donated to The U.P will make for a lasting memory at The Uniform Project’s 6 Month Anniversary party!
Raffaele’s line, The Mother’s Instinct, is filled with actual memorabilia from his grandmother and mother. Fabrics and buttons he received from the two influential women find themselves fashioned directly into the pieces, each individually handcrafted by Ascione, creating shapes that illustrate emotions like love or depression. 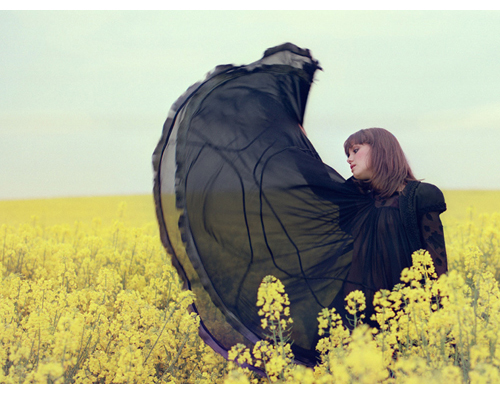 The satin cape from the collection was cut from an overthrow blanket his grandmother used to own. Old curtains were re-purposed to create a pleated trim and the shoulder pads are straight from his grandmother’s old jackets. Lady Gaga wore the cape to a launch event at HMV’s flagship store, Oxford Circus, after spotting Raffaele’s designs at the office of Dazed and Confused magazine’s Anna Trevelyan. The pop star has also been in talks with Raffaele for more pieces. Raffaele also sent us this gorgeous illustration he did showing Sheena in his ensemble.

Raffaele’s grandmother also passed on a great deal of vintage lace and fabric circa 1960 which he intertwined in the collection in continuance of his” memory is design” theme. To be worn by Sheena as a petticoat of sorts, Raffaele found the fabulous shear fabric used to make his chiffon dress at a flea market where his mother likes to shop. Topping it all off is a hand-plated belt made from shoelaces that will cinch the layered ensemble together. 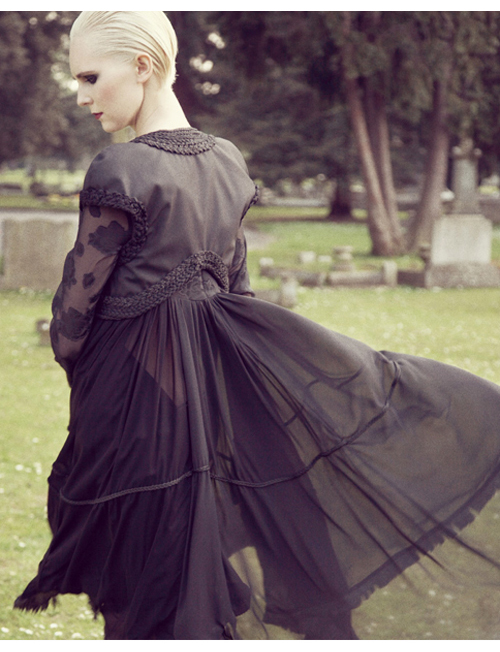 The multi-tasker finished the collection while also working for Max Mara and on his MA at Central Saint Martins College of Art and Design. In fact, all this doing has put a strain on Raffaele’s funds, and yet the young designer sees no reason to stop moving forward. He is asking for support from the fashion community in exchange for some spectacular, one-of-a-kind thank you presents. If after reading his story and eying his designs you feel so inclined, head to the donation page to support great ingenuity in fashion today.
Maybe it was instinct or maybe just chance, but Ascione’s creations will be quite the outstanding canvas for the U.P’s “Accessoireé” tonight. And could there be a better accessory for the Uniform than his stunning cape? If you need proof, check out the daily posts today.
Illustration by Raffaele Ascione. Additonal photos from www.raffaeleascione.com.