Remember when Sheena’s brother Sean ran the NY marathon for the U.P? This post is grossly overdue but we wanted to give you a full account of his run, a story that makes the hairs on our skin rise every time we hear him talk about it. Thanks to all the people who pledged for Sean’s run and fulfilled their promise, he raised $1885 in funds for the kids of Akanskha. Surgeon by day, squash pro and runner by night, here is the marathon story in Sean’s own words:
. . . . . . . . . . . . . . . . . . . . . . . . . . . . . . . . . . . . . . . . . . . . . . . . . . . . . . . . . . . . . . . . . . . . . . . . . . . . .
The flight to NY was great. I printed out a few posters the U.P. team made for publicity at the hospital, and blagged them on the flight. One of my neighbours, a great guy called Sunay Yildiz, travelling with wife n surplus of kids, pledged me a $100 for the race, to double if I finish under 4 hours! And for the first time ever, the customary long lines at JFK immigration came in handy too – I palmed out my remaining flyers to all and sundry either side of my queue. No such thing as too much publicity.
Cut to Sunday morning. The clock inches along to 10 am, and off we go! It was ideal marathon weather – not too sunny, not too windy, and it did not finally rain. I did really good time the first 15 miles, and the crowds were absolutely fabulous. People thronging the streets clapping, kids lining the sidewalks for high fives, residents giving out sliced oranges, drinks, paper towels – it was a fantastic experience. I was choking up with warmth inside, and feeling really good. Brooklyn was the best. Live bands every few miles knocking out the hits, and clamouring crowds. I kept well within my planned 8 and a half minute pace, and was thinking to myself – gosh, I might make it even to 3h45 at this rate!
Got to Manhattan Av in Greenpoint and Sheena and crew were lying in wait. We managed to sneak in a few quick snapshots for the daily. I did offer my sis the chance to run along for the remainder of the course, but she said she had the wrong kind of refashioned footwear on. Oh well, you win some. 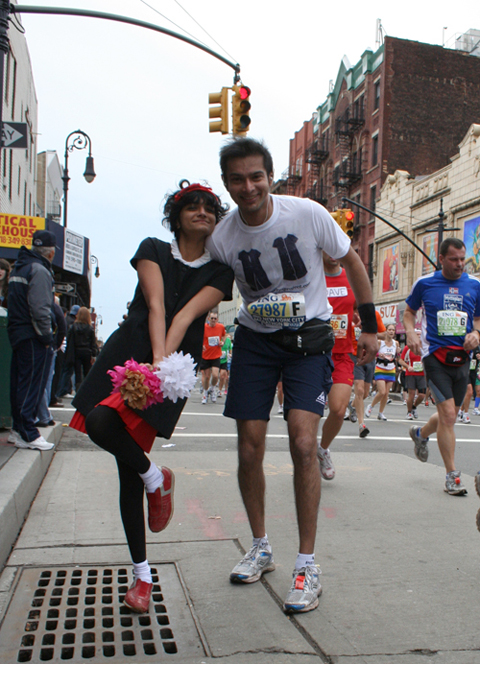 We leave Brooklyn, and the whole jamboree just falls apart. I cramped up on my left thigh between mile 19 and 20. That pulled me up short. Found a medical team at the side of the road whom I got some salt and water off but past mile 21, both legs just seized up. Quads, hamstrings, calves – all taut as a bow and sore as hell. Damn! I stretched as best I could, and started hobbling. It gets really demoralizing when this happens, cos everyone running at any normal pace is just passing you by on either side. Mile 21 and 22 were misery, it was the low point. There goes my plan to beat the 4 hour schedule and double all that pledged money. I had 3.2 miles to go, and I had to do them in less than half an hour, and I was running at over 12 minutes a mile. And even that was tough. Game over, sean. The best you can do is finish somehow.
And at that precise moment, the 4:00 hour pacers passed me by. There were four of them, all in orange, carrying orange balloons, and each of them with a placard saying 2nd wave, 4:00 pace. Hmm. Now then. What if, I thought. What if somehow I managed to stick with this lot? I have no idea how to, but I thought of all the people that had pledged to double their money for less than a 4 hour time, and said, cmon, lets give it a go. So I latched on to the girl who was at the rear of the pacer pack, and tailgated her. It was painful. I was essentially upping the pace from over 12 minutes to about 9 minutes a mile, and I had no idea if the legs were gonna take it without seizing up again. But I somehow made it through mile 23 right on her tail. Encouraged by my success, I strode forward a bit and plastered myself on to the bloke in the lead of the pacer pack.
This chap, I later learned, was Daris. Daris was leading the 4:00 pace and he also had 3 orange balloons in his hand. Those 3 balloons saved the day for me. I said, follow the balloons, follow the balloons, look at the pretty balloons sean, just follow the balloons. I was running so close on his tail that on one occasion a balloon knocked my headphones out of my right ear. We made it up to mile 24 marker and I was thinking, theres no way I can keep this up for another 2 miles. Daris was keeping a steady pace, I was vaguely aware that we were in Central Park, but I didn’t see one bit of it. All I saw was the three orange balloons. And I swear, if I wasnt for all you guys that promised to double your pledge for under 4 hours, I would have let Daris go on his merry way right then and there. Instead, I kept on his tail.
We got to mile 25. Just 1.2 miles to go now. The pace is steady, Daris is steady, and I’m very very unsteady. I’m still right behind him though. I just followed those three balloons. I said to myself, these three balloons are my life. My life is these three balloons. I wouldn’t let anyone run between him and me. If Daris veered left, I muttered my apologies for breaking rank and did the same. He swung right, and I did too. The only thing allowed between Daris and me was daylight and those three balloons.
We got to mile 26… 100 yards on. Another 300 to go. Still with Daris, still with the balloons. Where’s the finish line. Where’s the damn finish line, why cant I see it? Gosh! There! Striking distance! I flitted briefly with the danger of cramp again if I let rip now, and the wisdom of just keeping the pace. But I didnt. I saw the Finish hoardings in the distance, and I went full tilt. I could see the clocks, I could see that I was running into 3:58 territory, I was getting closer by the stride, I had my finger in the air, and I was over the line.
I hugged Daris, and told him he’d saved my life. I had been doing 12 minute miles, I was hobbling and he had taken me at a nine minute pace through 3 miles. Those last 3.2 miles are undoubtedly one of the hardest things I have ever done.
Show me the money : – )

EmilyKennedy says:
Oh wow. That is such a great story. From this ex-runner, BRAVO!
2010-05-20 10:30:17
Ann Marie says:
Sean rocks....you rock...Eliza rocks.....the whole UP Project rocks. Your whole family is great. Thank you for sharing! CONGRATS!
2010-02-04 23:44:23
Kathryn says:
I've run several marathons and I gotta say, those last six miles are killer even if you're not cramping. Fantastic work, fantastic motivation and fantastic finish! Congrats!
2010-02-04 14:27:00
meg b says:
Amazing story! Congrats!
2010-02-04 13:36:58
Beth says:
So cool! Thanks for sharing, Sheena.
2010-02-04 13:17:50
Linda says:
Well done, Sean! How exciting to see the race through your eyes. It's interesting what we all find to focus on in our travails like childbirth or exercise - just that one thing that will see us through to achievement of our goal! Thank goodness for Daris and his balloons, but with your determination, I'm sure you would have found anything to keep you going! You didn't let UP down AND you doubled their investment!
2010-02-04 10:33:32
bali resorts says:
That was quiet an interesting and fascinating post to read through....It was fun being a part of it.
2010-02-04 06:21:30
ammakke says:
Your awesome story takes me all those years back to my school days where I was struggling to write an essay on"WHERE THERE IS A WILL THERE IS A WAY"& also undoutedly "IF U DO YOUR HALF GOD WILL DEFENITELY GRANT HIS HALF!" Welldone,Sean!!!Proud brother of a proud sister!!
2010-02-04 03:31:38
Payal says:
$1885! Great job Sean! Through your little story here, you've not only shown us your big heart, but also your strong will. I know people say the world's going to the dogs. Sometimes even I do. But with people like you guys out there, I think we're ok. Much Love.
2010-02-04 02:30:17
prutha says:
great going sean... thats an awesome story...im glad you found focus in those balloons... i normally look for hot men to focus...[IM KIDDING!!]... i did the same race too... and although im amongst the world's slowest runners, i definetly had the best time of my life running the ING NYC marathon.... brooklyn definetly was the bomb!! here is my run report if you did like to read it. http://prutharaithatha.blogspot.com/2009/11/ing-nyc-marathon-2009-6hrs-and-15-mins.html and ofcourse, some kids somewhere r really thankful for your efforts...hope u got all ur money doubled -prutha
2010-02-03 22:02:31