What do you dress for? Seriously, think about it. Remove the preconditioned notion that it’s socially unacceptable to walk around sans clothes. There are a number of reasons, some functional and some frivolous: protection, attraction, deflection, association, decoration, tradition, I could go on. The consensus on our last blog post is that good design solves a problem. Adam Harvey, a fellow Brooklynite, technologist, designer and friend of ours is in the biz of solving modern problems caused by technology with technology. He is currently tackling the problem of personal privacy. Adam’s the man behind the Anti-Paparazzi Clutch that Sheena flashed at Ars Electronica back in September. Since then, he’s been busy with his latest project on how to artfully dodge surveillance cameras, in style.
He calls it CV Dazzle, an assortment of makeup and hairstyles that camouflage your face from computer vision (CV). Camouflage in fashion was originally purely functional dress for protection that turned into a trend. You’re probably thinking, “camo is so ’98,” but there are many patterns beyond jungle green and desert storm. Like Dazzle, which looks as snazzy as it sounds. Dazzle was a camouflage paint scheme used on ships during World War I. At first glance Dazzle seems like the anti camouflage, because it stands out rather than blends in. But its purpose is confusion rather than concealment. It makes it hard for an observer to distinguish the stern from the bow of a ship and whether it’s moving towards or away from them. (Same logic applies to zebra print.) Dazzle camo is also not specific to environmental lighting conditions, ie. it works rain, shine or online. (via wikipedia) 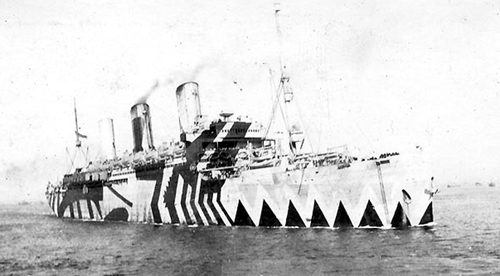 USS Leviathan’s starboard side “dazzle” camouflage pattern (U.S. Naval Historical Center Photograph)
Adam applied the principles of Dazzle to face concealment. First, he figured out what features make a “face” recognizable to a computer; its contours and shadows. Then he inverted the light areas with the dark to essentially create an anti-face. It looks like an extreme glam rock makeover, but actually it’s the opposite. Regular makeup enhances your facial features, making your face easier to recognize. CV Dazzle breaks up the gestalt. People can still see a “face,” but computers can’t. He’s now working on a SPF-CV scale from 0-50 (yes, like sunscreen) that takes lighting conditions and face angles into account and works for online applications, so you don’t have to worry about your computer stalking you at night.
Adam not only advocates privacy, he’s also for purposeful style; to deflect the wrong kind of attention and attract the right kind. His work proves that fashion and function aren’t mutually exclusive. In his own words “It doesn’t work if people don’t want to wear it.” So, next time you reach for your compact, decide if you want to put your face on, or take it off.
x. wasabipear
‘Take a bite.’ 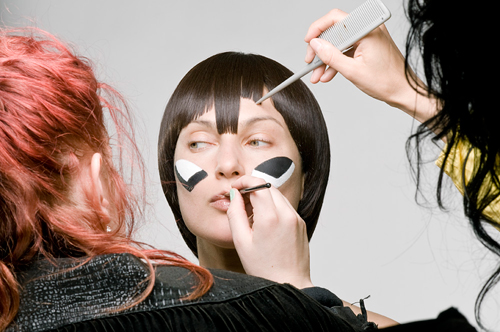 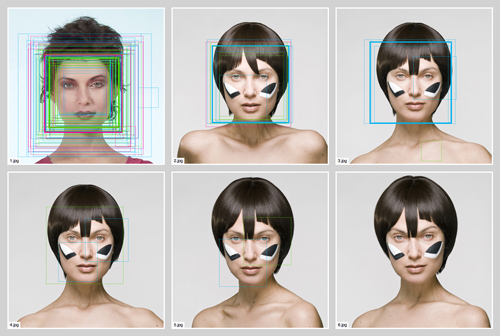 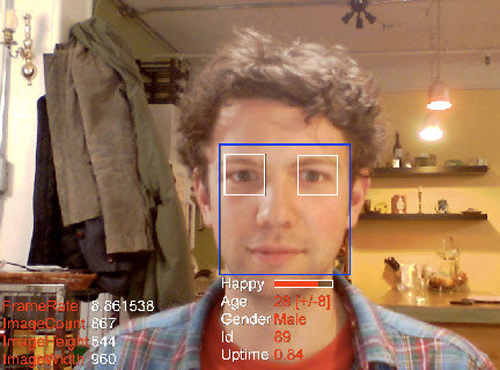 Adam Harvey’s face recognized. Image from SHORE (you can download a demo and DIY). 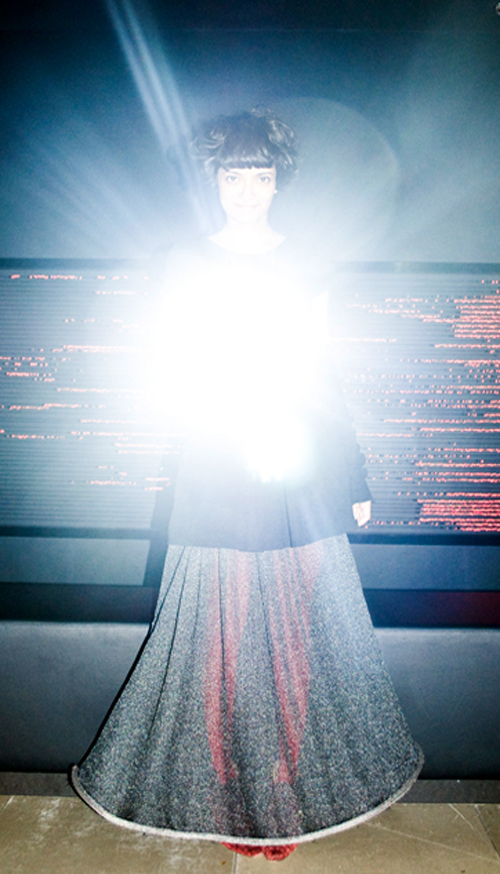 no face detected/soul intact « Rai Knight says:
[...] than me butcher the article, read about it here as well as some of his other amazing projects like CV Dazzle (via the uniform project blog) which is something like camouflage makeup that f’s up security [...]
2010-07-13 10:13:47
Rachael says:
Amazing. I wish I had a friend like Adam! Reminds me of all those "spy" movies where the lead characters always have some cool techie pal to whip up incredible gadgets for them. ;) So, if I have this right, the make-up artist has just applied regular make-up products to the model, and it is the technique rather than the actual make-up/hair style that blocks face detection? Genius, genius, genius. I couldn't agree more with one of the final statements by Adam--"It doesn't work if people don't want to wear it." Ne'er a truer word was said. This, I think, is one of the most important and seemingly obvious points for "sustainable" designers to keep in mind when developing each piece or overall collection. Or even anyone who is developing a new product or idea to present to the greater public. A very attention-grabbing post, U.P.!
2010-06-21 21:56:06
Rhiannon says:
Great stuff! I can't help wondering about the anti-paparazzi clutch though... Surely if you are lucky enough for the general public to care about you and by the same logic the paparazzi to want to take pictures of you, perhaps you should embrace the pap? Anti-Paparazzi pyjamas- now there's a thought x
2010-06-19 07:04:53
emily says:
I am a student at Academy of Art university and this past spring I worked with a partner on a collection for Diesel's Black Gold line inspired by Dazzle and its principles. wild! there is a saying that for every set of tiger's eye you see in the bush ten are looking back at you. cheers
2010-06-17 19:13:07
Jetauri says:
I wish they still painted battleships like that, but can understand why some stodgy old admiral wouldn't want to pilot something that looks like it's come out of a early Duran Duran video.
2010-06-17 11:27:14
ina says:
This is great!
2010-06-16 12:43:03