Adieu fast fashion
The Uniform Dress Project on the pursuit of style and conscientious living.
By Jennifer Lee. August 13, 2009
Uniforms are not generally associated with fashion, perhaps even less so with fun, but fun fashion is precisely what Sheena Matheiken, the pixie-sweet model at the center of The Uniform Project, has injected into this homogeneous genre of dress.
Conceived with friend and former fashion designer Eliza Starbuck the “creative experiment” is in its 102nd day of its extensive 365-day journey to enlighten the public and raise money for India’s Akanksha Foundation, a grassroots movement funding education for children in the slums.
Over the course of The Uniform Project’s life span, the public is invited to witness and comment on Matheiken’s transformation of seven identical black dresses into a year’s worth of eclectic looks. Asked why she chose a uniform to be the artistic vehicle of her endeavor, Matheiken makes reference to her childhood in India.
She reflects: “I think here in the West, uniforms are associated with rich private schools or catholic schools or institutionalism but that wasn’t really the case back home because most public schools had uniforms, that was the mandate in India.”
Unlike those who perceive uniform dress to be restricting, Matheiken has always understood it to be a welcomed challenge to her individualism. “I think that kids found more creative ways of showing a little flare,” she recalls of her school days. ” I always thought that [accessorizing uniforms] was really a fascinating display of all the idiosyncrasies of teenage madness and I think that still came out in really subtle ways and that was always fascinating.”
Armed with her own artillery of accessories, the versatile uniform designed by Starbuck for the project, proves to satisfy the demands of any occasion or whimsy. Unexpected in form and function, Matheiken’s tickle trunk boasts hats, cuffs, vests and the like procured from vintage shops and ebay, as well as the occasional sustainable fashion item donated by a local New York designer.
“I’d already gotten into the habit of shopping just vintage and through this project, the greatest thing for me has been the exposure I’m getting to actual sustainable designers,” shares Matheiken.
Specializing in the outré, the Web’s newly-crowed style maven’s nonchalance take on fashion is nothing shy of astonishing, considering the panache with which she dresses. “I just put things together that make me laugh and walk out of the house,” says Matheiken of her speedy morning style routine.
When admiring Matheiken’s one-of-a-kind togs, whether it be a Tour de France-inspired ensemble or a pair of lace knee highs that parades her Harajuku moxie, it’s hard to fathom how these looks could be anything but premeditated, but as The Uniform Project’s muse shares, between her day job as a creative director at an interactive ad agency and juggling her seemingly sleepless side project, hers is the schedule of a superhero. A telephone booth away from a cape crusader’s wardrobe break, Matheiken simply doesn’t have the time to spend all night planning her next showcase outfit, and as she impishly points out, what fun would there be in that?
“I like the sort of serendipity and chance involved in just throwing something together and sometimes it’s really surprising how things come together,” she giggles. “Some of the days I walk out of the house not having a clue whether it’s actually hideous or cool but I don’t really care,” she laughs. “I have to not care or else I will drive myself crazy!”
Luckily Chance has plenty to play with; in fact between Matheiken limited closet space and the huge response from those who wish to donate accessories in support of the cause, a screening process had to be implemented. “I have a pretty eclectic style but there are some things that just won’t work with the uniform,” explains Matheiken. “I don’t want to be accumulating more stuff that kind of defeats the purpose of this project.”
Struck with the feeling that she’s traveled far beyond the parameters of her personal aesthetic Matheiken basks in the unfamiliarity.
“I think that’s the beauty of this for me,” she says of the change, “cause I wanted this project to really push my creative boundaries and it’s definitely doing that.”
The Uniform Project is a hybrid of cultural commentary, artistic experiment and socially-astute charity. And while the service leg of the project is fund raising, it’s Matheiken quirky and enthralling fashion savvy that has taken hold of the public.
“We’re not activist by any means,” affirms Matheiken. “But this was really a fun and friendly attempt at making sustainability a fun thing, to freshen up that dialogue and to show that style and sustainability aren’t mutually exclusive and needn’t be mutually exclusive.”
All accessories considered, it may just be time to bid farewell to fast fashion and its fair weather friends. Read original > 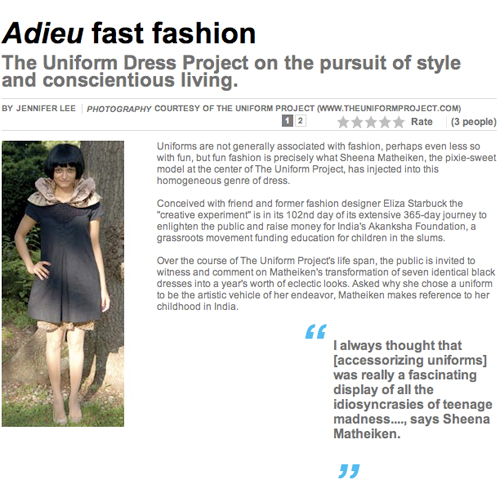