CAN YOU WEAR THE SAME DRESS FOR 365 DAYS?
11 December 2009
Blogger Sheena Matheiken, who’s undertaking the challenge to help kids in India’s slums, is aiming to go all the way. 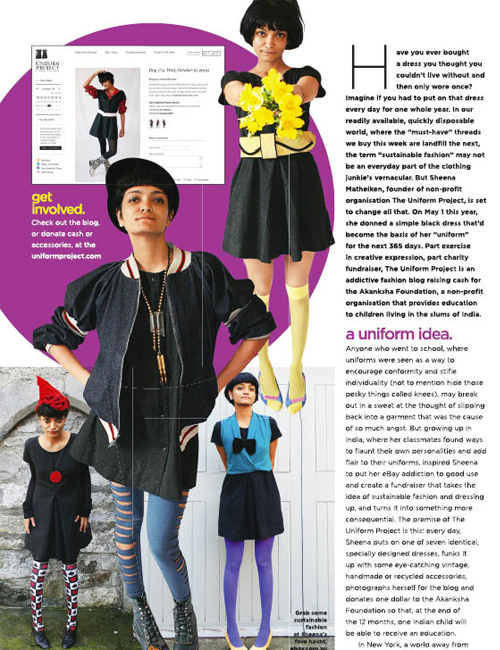 Have you ever bought a dress you thought you couldn’t live without and then only wore once? Imagine if you had to put on that dress every day for one whole year. In our readily available, quickly disposable world, where the “must-have” threads we buy this week are landfill the next, the term “sustainable fashion” may not be an everyday part of the clothing junkie’s vernacular.
But Sheena Matheiken, founder of non-profit organisation The Uniform Project, is set to change all that. On May 1 this year, she donned a simple black dress that’d become the basis of her “uniform” for the next 365 days. Part exercise in creative expression, part charity fundraiser, The Uniform Project is an addictive fashion blog raising cash for the Akanksha Foundation, a non-profit organisation that provides education to children living in the slums of India.
A Uniform Idea
Anyone who went to school, where uniforms were seen as a way to encourage conformity and stifle individuality (not to mention hide those pesky things called knees), may break out in a sweat at the thought of slipping back into a garment that was the cause of so much angst. But growing up in India, where her classmates found ways to flaunt their own personalities and add flair to their uniforms, inspired Sheena to put her eBay addiction to good use and create a fundraiser that takes the idea of sustainable fashion and dressing up, and turns it into something more consequential.
The premise of The Uniform Project is this: every day, Sheena puts on one of seven identical, specially designed dresses, funks it up with some eye-catching vintage, handmade or recycled accessories, photographs herself for the blog and donates one dollar to the Akanksha Foundation so that, at the end of the 12 months, one Indian child will be able to receive an education. In New York, a world away from the slums of India, Sheena’s uniform is a well-constructed and incredibly versatile design feat. Friend, fashion designer and creative partner of The Uniform Project Eliza Starbuck wanted to make a durable dress from breathable cotton that could be worn both ways, front and back and also open as a tunic. It’s light enough for balmy New York summers, great for layering in the cooler months and always ready for a fashion moment.
Bringing Joy Back
While the thought of wearing the same dress every day may throw some into the dark pits of fast-fashion withdrawals, Sheena loves it. “Getting ready is the easiest part of this project. The dress becomes part of my skin in a way, so it’s actually more fun because I have a base piece as my jumping board. I think, ‘What can I build off this today?’” The rest of her outfit is made up of existing pieces from her wardrobe, second-hand or vintage clothing she’s sourced from eBay, and accessories donated by the public. When it comes to adding a more sustainable dimension to your wardrobe, Sheena suggests shopping vintage, buying quality investment pieces that’ll last longer, and playing around with what you already own. But she also says there’s a need to recognise the decline in individuality and creativity in mainstream, mass-produced fashion. “Consumers are pressured to shop and, when you stop and think about it, everybody ends up looking the same anyway. Our project is really trying to bring the joy back into the act of dressing up. We’re showing that you can have a lot of fun and feel like a million dollars just by being creative and knowing nobody else is going to be walking out the door looking like you.”
Dressed for Success
The project has been such a success that, not only has it raised over $27,000 in the first six months, there are also plans to manufacture and sell the now-famous uniform. We’ll have to wait a while till it’s available, so, in the meantime, just be content with watching Sheena out-style most of those with a disposable wardrobe. And as for day 366? “I don’t know. I might get obsessed with the dress and not want to take it off!  Read original >

Anneka says:
See....Australia loves you!!
2010-01-06 21:10:18
Elly says:
I bought Cleo and was reading it, and that's how I found your website. What you're doing is absolutely incredible! I come to your site every day and check up on what you're wearing, and I love all your accessories and clothes you have great style. All for a great cause, you are doing a great job. Hope you have a merry Christmas and keep up your inspiring work. Xoxo.
2009-12-25 07:11:54
Nadege says:
Brava, Sheena! $27,000 - that's an amazing sum for such a short period of time. I'm going to shoot for 10 days wearing black turtleneck and black leggings with boots. For spice my favorite color purple: a shawl, jewelry, skinny knit scarf. Hopefully, I will move onto a month. I commit to $5- a day and double that if I get a compliment. And, naturally each person will hear about the uniform project.
2009-12-18 21:43:59
ammakke says:
Absolutely awesome & inspiring....I am stuck for words.... All my prayers& blessings!!! All the best to You,Eliza!!! Assuring Sincere prayers....amma
2009-12-17 15:36:05