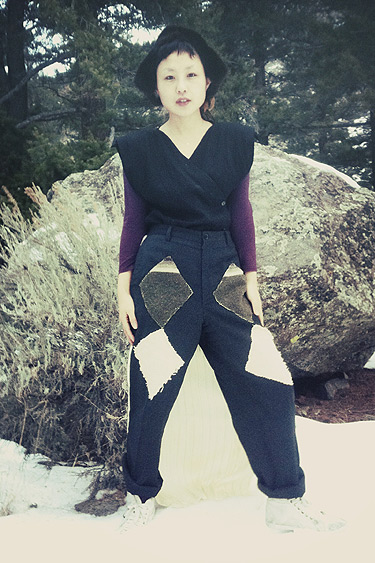 hi from the mountains! yesterday stopped by yellowstone, and met many wild deers, elk, bison, coyotes.. so every time kaya had to bark at them in the car to protect us, even from fake ones:( thanks girl.. the whole view was so beautiful. i was amazed by the colors, mainly white of snow, and everything else was dark brown of trees and animals. many brown spots on the huge white carpet. then i remembered this.. in the middle of kyoto (the city in japan) they always try to keep ‘the feeling of kyoto’ which is a traditional old japanese feeling. so what they do is keeping only the basic colors in the street views, not to mess it up with many colors. for example mc donald’s sign is brown and white instead of red and yellow. so as other stores..i heard. i like that idea, and also i kind of like that they just accept having mcdonald’s even though they’re so careful to keep the city’s feeling. it’d be nice for them too if they just didn’t have it, but i guess they wanted to have it so they improvised. i like to respect the traditional things but also like to accept the changes. this is not about everything, but just wanted to say better not to refuse everything without knowing it. there might be some way to get along if you really try to know it. then if you could find a way to harmonize, it could be the happiest way for both of you. i imagined if those animals and natures were trying to harmonize beautifully with this snow and became all brown, would be so sweet. so today i tried to harmonize with them too:) hope i could. last night it got totally dark here but millions of white spots in the sky. turned into many white spots on the black carpet. they were so harmonized as usual. hope you feel a harmony with something today. happy december 8 x o x o a

hi, you clothes & shots are just great, but the best of all is your dog!

christine tagged this so creative

i feel a harmony with your words so i thank you for that. such a poetic view. it’s a pleasure to come here every day and get a tiny peek into your beautiful world.

Your outfits are so personal and beautiful, and so is your story! Thanks for sharing

Every day amazing! Your clothes are stellar, artistic and beyond creative. Love. People should donate more!!!!

i visited Kyoto in november; such a stunningly beautiful city and the people there were generous and friendly. it must have been a shock to move to a country where someone would steal the phone from your hand!
i’m really enjoying your road trip, thank you for the fantastic photos

Kaya is my favorite part of this whole thing!

I really appreciate the deep philosophical nature or your posts. And the styling, as always, is incredibly artistic.

You and Kaya harmonise so beautifully.

I like your style, I like the dog, I like the journey, but your photos are just bad. It’s impossible to actually see the clothes. I think this might have been one of the reasons the 2nd month didn’t do very well, and this is off to a weak start. How about a real camera UP?

I don’t think the photos are “just bad”, to me this kind of photos is very appealing, because it gives the pictures a new dimension and they are not, as the month before, just documentation – (while you still see the clothes and get an impression of look+mood)

noa tagged this LOVE LOVE LOVEOVEOVEOVEOVOEOVE LOVE those pants! quirky and creative and it WORKS.

@Lisa @Betty
i agree-with Lisa. the photos aren’t bad, and i, for one can still see the (sublime) clothing! I kind of like the “lomo” feeling of the daily pictures…

I think the photos are excellent, stylewise and otherwise, it’s a whole another thing from the second month, or other months, there’s no comparision

These pants are amazing as is your penchant for repurposing old materials and mishaps into something new… black stains into a stitched design, puffy vest into a skirt. You don’t just talk about it, you do it, and it’s beautiful.

I’m with the others who like the artsy quality of these photos. These photos document the style, the dress, the journey, the dog, the artist. It’s a rich perspective. Sheena’s white wall was great, for Sheena, and the Western Quest photos are perfect for Aki Goto.

today’s dress is my favorite !!