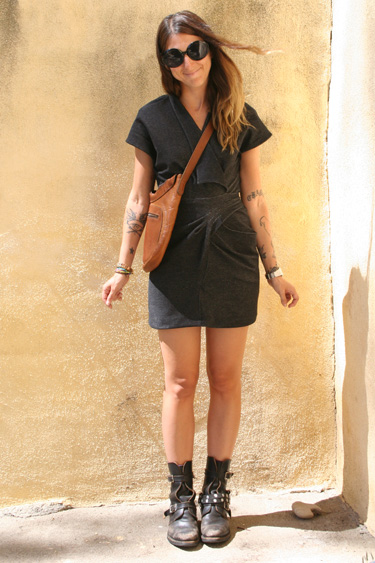 Little Lady Out On The Town

On Sundays in LA they have the Fairfax flea market. I didn’t buy any clothes I swear! I did buy some cassette tapes for a few of my friends who have cassette players in their cars. How cool is that? I found Jane’s Addiction “Ritual De Lo Habitual” and Neil Young “After The Gold Rush.” These boots by the way are one of the best purchases I ever made. I was in college and I heard of this little thing called “ebay” so I decided to try it out. I just typed in “motorcycle boots”

because I had always wanted them, and these bad boys appeared like a set of newborn identical twins. They were new at the time I think, and that was almost 10 years ago (ugh, I’m old). They are made by Harley Davidson and have been with me through the toughest of times. I also just purchased this bag a few weeks ago. I’m not a “bag lady.” I don’t know what a good bag is, I usually just rock a tote. But I like this one. It’s vintage from some store on Vermont that I forgot the name of.

those boots rock! i usually dont like motorcycle boots even though they are very in( not much of a trend person) but these i luv! nice one. dont be afraid to step outside the box and be more creative. keep on keeping on. 🙂

I really like the dress, even though it seems so fancy
it might be difficult to create very different styles with. Here, boots, bag and dress come together to make a very great, laid-back look!

I love those boots! You have a great sense of style… keep up the good work!

Those are the most excellent boots ever!

haha, i like the boots… i don’t know about the bag, but that’s just me.

holly tagged this those boots were made for walkin’

i’ve got a fifteen year old pair of shoes, hand made, just won’t give up… some times shoes / boots look better the older they are! love the short boot / short skirt / lots of leg look

Hi Lesly, welcome to UP! I know I’m 6 days too late, but I have been online in a week. Anyway, less about me! I love your dress, it’s so sexy-rock star-cool! All your looks have been absolutely brilliant and your cause is very meaningful. All the best for the rest of the month! P.S: lurve your boots.

love the music, love the boots, love the dress. love the cause. so yes all around then.

God, what did we do before Ebay?

You just satisfy me every day. I can’t give you any constructive input, just say over and over I like. Like the boots, the bag, you look great. 🙂

It’s a great dress and you look fabulous in it…would love to see you to do a little more with the dress than just change your footwear and sunglasses.

Love the look! Is the dress convertible in anyway? If so, let’s see it soon!

Simple and nice. And proves my long standing belief that one can carry a brown leather purse with a black outfit – you just have to do it right!