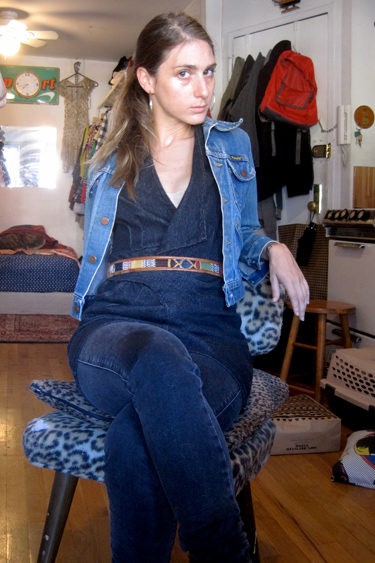 Today I’m wearing my denim tuxedo. I kind of have to wear “normal” clothes to work. I like this vintage belt, it adds some flavor to the denim tux. I wanted to talk a little bit about Phoenix House today and why I chose it. When I was 27 I published a book called Dear Diary with Vice magazine and MTV. It was a “funny” book (based on the column I wrote for Vice) but really it was kind of dark, as it dealt with the personal struggles I’ve had with substance abuse. Before the age of 22 I had been to rehab twice. Phoenix House always seemed like one of the places that was really well known for helping not just people with substance abuse issues, but also younger people. At the time I felt like I was the only person in the world who was getting sober right around the age where I was finally legally allowed to drink. It was a weird time but a time I will never forget, only because it was so painful and scary, but also pretty miraculous. Phoenix House is one of those facilities where I can see myself working one day (when I get my CASAC). There was a time I thought that being sober meant I had to give up a life of anything fun and awesome and exciting, and I can’t even begin to stress enough how the opposite has come true!

Thanks for the info about the charity, it’s really helpful and makes it seem very real. Hope you get lots more donations (: great outfit today if heavy on the denim; the belt is a beautiful touch.

like how the dress became a denim top today and gota say the belt is making it.

All denim all the time. I love it!

Fantastic! I love the all-denim look. <3

You’ve got serious style. You pull it off, every time. It’s that tough look you give. I never would have thought that head-to-toe denim (three different denims!) would look good but you made it happen.

Great outfit. All denim is fab. Luv the belt. Thanks for sharing with us about PH. Will donate, come on everybody.

I never thought I’d ever say this, but denim on denim on denim doesn’t look too bad! Good on ya for breaking the rules. Thanks for sharing your story with us.

what happened to the new fabric version ?

Anneka tagged this Love it!!

I’ve loved all of your outfits so far, you’re doing such a good job! It takes guts to do something like this, I’m glad you’ve reminded people what this is really about, maybe people will stop picking apart your outfits now! Keep rocking it like you always do 🙂

been busy and just checked in since last week–the 18th was beautiful!! Keep going–you are doing a great job and I hope you make alot of money for Phoenix House!! If all of us put the effort you have put forward, our charities would be overflowing with funds!! Thanks for the inspiration.

I like you taliking about Pheonix house and why you chose it. Good post, and courageous too.

md tagged this thank you

good outfit.. and I dont usually like denim. But more importantly, you told us why you are doing this – thank you for sharing your story, and highlighting the primary purpose of all this…

Btw, is that you on the picture of your link to Dear Diary?