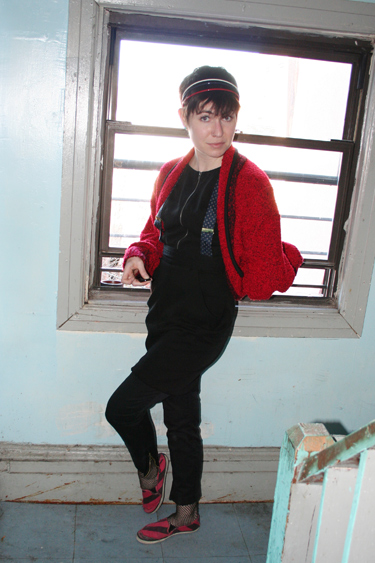 Do you guys watch TED Talks? I feel like a certain online hub of people are hoarding them and many are unaware of their existence. And whenever I introduce a new comer their reaction is always “why didn’t i know?! etc.” So if you don’t know get to know. These talks are basically an aggregation of the jazziest movers and shakers right now who talk about their wild and wonderful creations and ideas.

TED has a bunch of sort of franchised versions of the talks in cities all over the world called TEDx and Dubai contacted Sheena almost a year ago to be a speaker. So she jetted over there and gave 18 minutes of her all. Why 18 minutes? Talk selector Chris Anderson says “By forcing speakers who are used to going on for 45 minutes to bring it down to 18, you get them to really think about what they want to say.”

The point I’m trying to reach is ~ it’s awesome, watch it! xx.wasabipear

ala Hef with love from eBay Green. Suspenders from somewhere unknown. Keds!

i love TED; you can catch a great talk online, and justify time not spent working by knowing are expanding your mind… uh, does that work? lucky i’m my own boss.

TED talks are so inspiring! Did you match your outfit to the TED talk? Props again for reppin’ the red. Ebay green…always pulling through.

The colour palette today is so lovely!

great taste in hosiery and shoes once again !

Thanks for letting us know about Sheena’s video; I enjoyed it.

I love your hairstyle! and again thanks for the video link! Sheena is great. and TED talks are also great.

i love the reversibility of that smoking cardigan.

Thanks for the tip with TED talks. I didn’t know them, but will watch closely from now. 🙂
Looking good today again.